After finding out many districts in San Diego, a plenty city where everything as to be seen like Mission Bay, Coronado, Old Town, 5 friends and I had decided to go to Los Angeles during a week-end long. It was a fully moment, fulfilled by wonderful landscapes and amazing buildings. We reserved an Airbnb apartment near Downtown Los Angeles in order to being closer from the city’s core. So here is my recommendation to go Los Angeles :

The day become early (but not too much), at 9:00 by taking a little breakfast, seating on the sofa in your patio in front of an appealing view of Los Angeles. After dressing yourself and be sure you don’t forget your sun cream, you go out there. Because you are next to the south of Los Angeles, where most of the skyscrapers are, you decide to visit and admire those large streets. Fashion district, Downtown, South district, and Jewerly district are well-known district which can be compared to downtown  New York.

And coincidentally, you find yourself behind the oldest funicular railway built in 1901. Since the 4th September of 2017, the funicular has been returned to service in order to celebrate the Labor Day. We have taking it, and it was beautiful to explore Los Angeles from an old way. After having enjoy this moment, it is time to go to Chinatown and eat in a restaurant and taste Chinese food. Don’t worry if people look at you as if you are weird : Chinese are not used to see tourists or strangers in their restaurant.

Now you are ready to move and to go visiting Beverly Hills before going to Griffith Park and Observatory. First, Berverly Hills seems to be unreal because houses and villas are so big than everything else we have ever seen. For some, is like a dream to live their due to the amazing garden and villa architecture. It was so so …. I  don’t have the world to express it, but pictures will explain it in an easiest path. Second, the sunset at the Observatory is the better one I have ever viewed. The height at which the observatory is, allowed you to contemplate Los Angeles, city of angels. Now, I understand a little bit more why this city is so much grudge by tourists and inhabitants.

To finish this day, a little walk on Santa Monica’s pier would be the perfect ending point of your trip. In that place, you will enjoy eating in some fast food, looking at basket ball players and skaters who stay late to practice again and again. But you could also experience a new thing : A weapon test. In USA, carrying a weapon is common, and so testing it in a specialized center is already easier. On of mine recommendation would be to absolutely do it !!! At the beginning, it is a little scary because other American are there and you are not prepared to feel all vibrations spread out by the ball. And when it’s your time to shoot, you don’t want to flunk.

That was our trip !! We are not going to forget it. 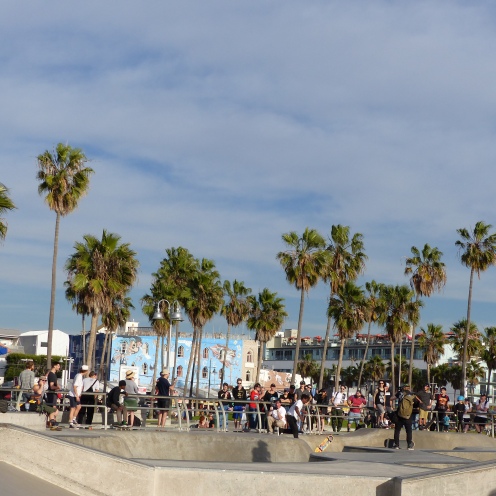 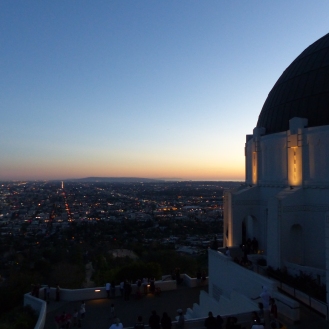 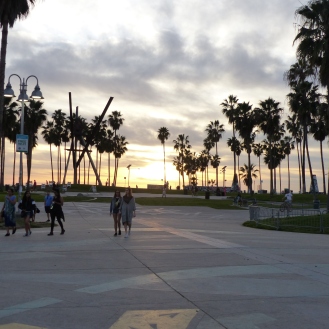